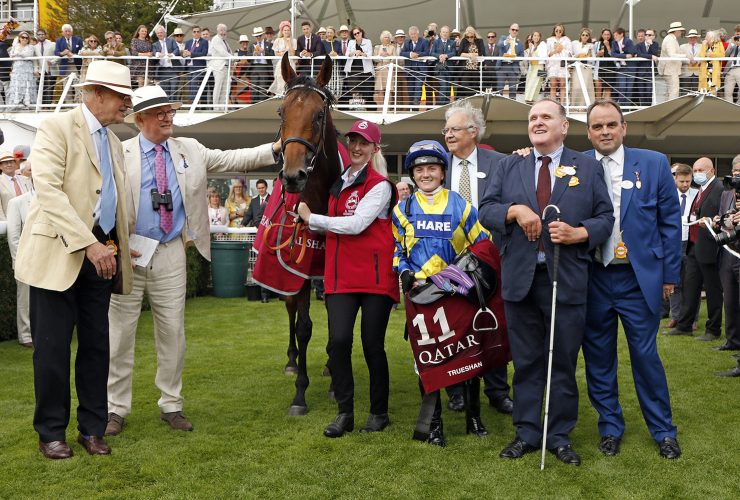 Planteur’s son Trueshan relished the conditions at Goodwood today with a decisive victory in the Gr.1 Al Shaqab Goodwood Cup.

When he hit the rising ground the five-year-old powered three and three-quarters lengths clear of Away He Goes to win for owners the Singula Partnership and provided trainer Alan King with his first Gr.1 victory on the Flat.

Trainer Alan King said: “It is a very special moment. I have always enjoyed my Flat races and this is very special. This is up there with the Champion Hurdles. All I want to do is train proper horses! I am not giving up the jumping yet!

“Hollie has given him a great ride and the owners have been great supporters of mine. Trueshan can be a little keen so I'm glad he had a proper race at Newcastle – he could have been ferocious today if he hadn't had that run.

A second Gr.1 win for jockey Hollie Doyle, she said: "I was very confident but I've not had many top-level experiences, especially not on a short-priced favourite, but he's exceptionally talented on this ground.”

Winner of the Gr.2 QIPCO British Champions Long Distance Cup at Ascot last season, the Prix du Cadran is likely to be Trueshan’s big target for the autumn.

Bred by Didier Blot, he is a half-brother to four winners in France, out of a winning daughter of General Holme, and is by far the best performer under the first three dams on his page.

A Gr.1 winner and the highest earning son of Danehill Dancer, Planteur enjoyed great support from breeders in his first season at Chapel Stud this year having relocated from France.